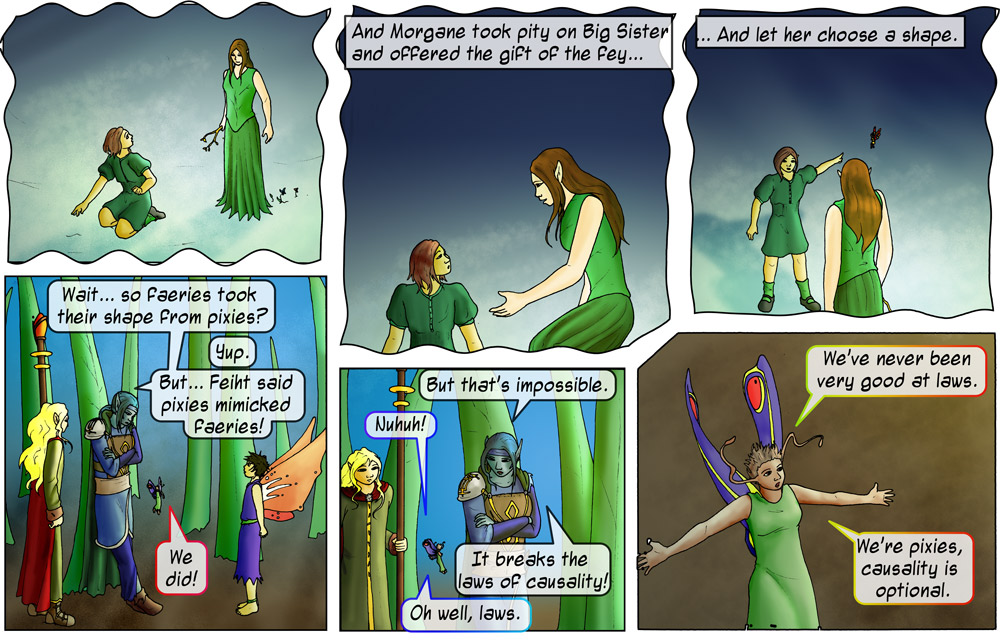 yay, new comic! *looking for someone to hug without succes, so hug computer instead*
keep up this speed, I like it :)

Took pity for what? Runing away from home? Was she, like, FORCED to run away?

Not only it breaks the laws of causality, it also mean nobody really invented the shape. Shows how powerfull pixies are ...

She took pity on Big Sister who was heartbroken at being unable to run with the unicorns. If you have read The Last Unicorn, you will understand.

If you have not read The Last Unicorn, by Peter Beagle, you should remedy the situation immediately. Do not assume that having seen the movie is a comparable experience.

...I bet that Feiht went was the one who went or will go back in time. Just because it seems like something that Feiht would do, just for fun. And then forget about it. :)

Reminds me of Road Runner.

Coyote holds up placard reading: I wouldn't mind, but he violates the law of gravity.

I think that particular pixie could've chosen that form for that meeting...
And Big Sister mimicked it. Then... the pixies saw the innocent elves and mimicked them, so Feiht's story could be right

Love the new strip, love the alt-text!!!!! Wish I could make laws of physics run away crying...

You could say that when pixies are around, causality...
*puts on sunglasses*
... is a casualty.

They should've learned by now that no laws apply to the pixies.

They should really not expect stuff Feiht says to make sense... Still love the wings in panel 4! What can i say, i just love wings!

@Someone: You win. : D (adopts sunglasses)

Yay comic! :D
And always love how stuff about pixies makes perfect sense, as long as you don't expect them to fit in with anything to do with physics. Or reality. XD

I think the pixie's right. No matter they don't like logic, neither do I! :D

Logic is for wussies anyways. ^^

Hk: I dunno if she felt sorry for her running away as much as "hey, kid freezing to death in snow. Should prolly do something about that." I laughed so hard at the alt text I squirt Sprite all over my desk and am typing this after spending a good 15 minutes cleaning up.

WHAHAHAHAHA!!!!! first laugh in a long time. glad to see the comic back and everything alright.