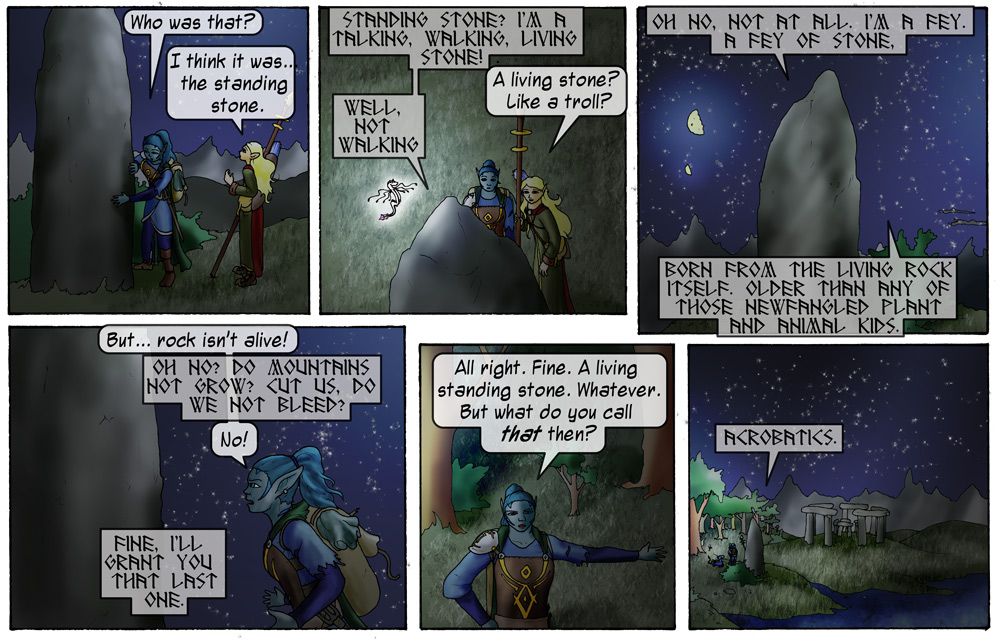 That pun is awesome! Thanks Alien :)

Do I detect a touch of Venice in frame four?

The jokes just keep coming in this one. Love it! :)

Ouch! No good pretending innocence - she lives with you and we know it.
I like the attitude of the stone(d?) fae towards the "newfangled kids". Shows that even if you are immortal some things don't change.
Good coloring and shading.

You washed your hands in innocence? Why, you didn't put the pun in the comic, so it is easily forgivable.

And Obelix is their local transporter? :shock:

Is that fey of stone a Databank?

Now why do I keep thinking of Spinal Tap?

Well, the *big* rocks do 'bleed'...it's called 'lava'. Then again...that could be just a burst pimple, geologically...

Actually, rocks neither grow, nor bleed. Lava is "liquid stone", and while mountains do get pushed up (by tectonic movement) they erode over time from sun, wind and rain. I guess that rules out immortality as well =D (Sorry for the lesson ;)

Does the planet of CtS have two moons?
Because in frame 3 it looks like there are two moons, a big and a small very small one.... or maybe the small piece broke away from the moon and is falling towars earth...

I think Feiht must have noticed the moon is shiny, so she's stealing part of it

the stone is probably bored. its not like it can go visit the neighbours on quiet evenings

Before thinking about any carbon-silicon analogy, remember that while carbon is the important element, the carbon-based live forms are still mostly water. That is why we bleed. So no, lava can't be seen as blood-equivalent.

How does the stone talks? Telepatically, or does it move? Some specific part of "body", or vibrating as a whole?

Hilarious.
I marvel at the puns you come up with at times like these.....

Speaking of monoliths and henges, check out the past week's "Little Dee" strips.

He who brought up Lost years of merlin...
These stones do not move
And Ayne would have been eaten by now..

Oh, you're building a henge, are you? That sounds lovely.

All I want to know is HOW.

DnDN: Is it not obvious, they jumped.

You look away from them for a moment, and they are different when you look back. It isn't what you see, but what you don't see.

Well if you count thermal expansion rocks do breathe, but I think that's the extent of their lifelike functions.

I think that "little moon" might be the fairy dragon fading into the background...

But it didn't fade... It's still there in the last panel.

Maybe the moon has a moon?

The same look is caused by the same sun lighting them. Astronomically, planet with two moons make much more sense that planet having moon which have moon. Of course, both is valid for our world and not necessary for The World That Is.

Its a fantasy world. Its much more likely that someone just took a bite out of the moon.

And then spit it out because it tasted bad? ^^

The World that is does indeed have two moons, the larger one being the smallest (but closest). This was established quite a while ago already... and here I thought you all had perfect memory of even the most insignificant trivia of this strip! :P
Dragons count time not in years but in conjunctions, a near one of which is shown in this strip (to be exact, a lesser conjunction: world+moons in one line. A greater conjunction would be sun+world+moons and would have the moons either full or empty). A conjunction (lesser or greater) is the only time when the moons have the same phase and the only time they appear near in the sky.
In other words: if the moons are close together in the sky, they will have the same phase and be in conjunction (as now). However it's quite possible for one moon to be full and the other just a thin crescent, provided they're quite separate in the sky.

At one point I tried to calculate the exact orbits and then found this is called an N-body system (with N=4) and people a lot smarter than me have tried for ages without success.

Even I remembered that, and I have a terrible memory...
*holding up a "Love Da LunaS" sign* I like two moons, twice the pretty pretty shiney shiney

And I have to ask... why has Feight never tried to steal the moons?

Myst: who says there were only two to begin with?

The Gods probably fey-proofed the moons. And the stars. And scary wolf-eyes, though that might just be wishful thinking.

Maybe the moons are far enough for pixie to lose interrest before she got near ... nah, that wouldn't work, pixies are too fast. On the other hand ... pixies are capable to be distracted really fast, so maybe ...